PTP Welcomes Their New Director of the Community Outreach Program 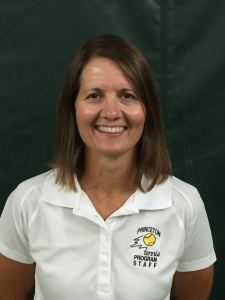 The Princeton Tennis Program considers its Community Outreach Program a vital function in terms of integrating tennis throughout central New Jersey, thus making it essential that its new director be able to sustain the high-quality standards set by outgoing director Eric Wall.

PTP feels it has found just such a person and is proud to announce the hiring of Stephanie Howard as new Director of Outreach.

Stephanie’s impressive credentials and tireless work ethic will provide a seamless transition in leadership. Wall remains as PTP Tournament Director, but has stepped down from the Outreach position due to after-effects of a serious car accident.

Howard takes over after being named the USTA Middle States New Jersey Teaching Pro of the Year for 2018-19.

“I am very grateful to be part of the PTP team and look forward to growing outreach programming and promoting PTP’s mission,” Howard said. “Outreach activities engage diverse populations in the game of tennis through accessible programming. Let’s get on the court together!

Stephanie will continue the quest of meeting PTP’s mission to serve and connect the community to the sport of tennis, regardless of race, religion, age, physical abilities, skill level or financial means. Her Outreach responsibilities will have two main focuses. The first is to recruit, provide mentorship and manage the PTP Apprenticeship Program. The second is to maintain and expand PTP’s commitment to charitable outreaches by coordinating or conducting Community Park gym classes, wheelchair tennis, Community House outreach (PACE), Princeton Child Development Institute (PCDI), Special Olympics and Camp Shriver, and the Every Child Valued program.

A Professional Tennis Registry pro and a United States Professional Tennis Association Elite pro, Howard played in two NCAA Division II national tournaments at Shippensburg (Pa.) University. She has been involved in tennis programming for over 30 years, and has a Master’s degree in Social Work and license in Clinical Social work. Numerous outlets in New Jersey and North Carolina have benefited from her social services.

Her goal is simple – continue the growth that Wall started.

“My hopes and dreams include growing the game of tennis with the PTP team, which includes a great base of volunteers and professionals,” she said. “Tennis teaches us all life skills that we will carry off the court.  This great sport is also heart healthy and connects us to amazing people and situations.”

The new director has a quality template in place, as Wall made PTP Outreach a model tool in his never-ending quest to spread the benefits of tennis. 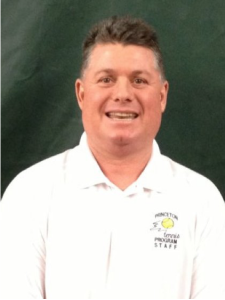 “Eric had a big job that he loved, and he was great at it,” outgoing PTP Director Gwen Guidice said. “It was unfortunate that he could not maintain the same pace after his accident, and I know this was a hard decision for him.”

Eric came to Princeton in 2000, when Outreach consisted of wheelchair tennis and the Community Park classes. Under his supervision, expansion took place in 2012 and included the YMCA After-School Program in Hamilton, Every Child Valued at Lawrenceville Pace Center in Princeton, the SONJ Shriver Camp in Lawrenceville, the Breast Cancer Awareness Tournament and the Allied tournaments.

Wall received the USTA Middle States New Jersey’ prestigious Teaching Pro of the Year award in 2013-14. But asked to recall his proudest moment, Eric said, “Being involved with all of the Outreach players and seeing the amazing smiles on all their faces. It was happiness in the purest sense.”

PTP is enthused that Eric will remain as Tournament Director, a job that he has handled impeccably with class and grace over the years.